In 2012 I got to know Ellen DeGeneres via You Tube. She has brought laughter, wisdom and the spirit of generosity into the forefront of my life. She also introduced me via Rosie and Sophie to the term #selfie.
All of this inspired me to launch Project 7 International on the anniversary of the Opening Ceremony of the London 2012 Olympic Games and to see if I can get loads of people doing the #unselfie and #groupselfie.
In 2012 I also volunteered for the London 2012 Olympic Opening and Closing Ceremonies as a Pandemonium Drummer and Athlete Marshall.
Being one of the first at the Olympic Park meant being there at times when the general public weren't there  and gave us the opportunity to take great photos of yourself in great locations.  Fellow volunteers would offer to take your photos for you and of course  Games Makers were often seen offering to take photos of visitors - in there 10's of 1000s once it was open to the general public.
During these experiences I began to realise that actually taking a #selfie was perhaps often the best way to get the picture you really wanted, making sure you framed it as you wanted it and catching oneself with the right spirit and smile in this one off special occasion.
Following the Games I became a keen #selfie taker.  Often times politely declining offers of others to take photos of me and my friends when I was out and about at events and parties.  Instead taking the photograph myself but still managing to be in it too.  Thus the #groupselfie was born.
As my confidence in taking photos grew I felt able to offer my skills to get the #unselfie photo.At the Go Local Volunteering Celebration at the Queen Elizabeth II Olympic Park on Friday 19 July I began sharing the concept and trialling it. 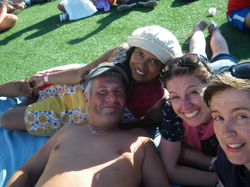 #selfie (taking the photo yourself, arms stretched, not looking through lens)

Here you can see me re-uniting with fellow Pandamonium Drummers, me on the far right. 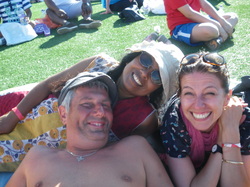 Here is me using the same technique of a #selfie (taking the photo, arms stretched, not looking through lens) However to make it an #unselfie you slightly adjust the angle so as not to get yourself in.  People who take #selfies may have found that this happens anyway.  So the #unselfie is best used when tourists or srangers at events or parties ask you to take their photo.

I believe that this is a technique that volunteers at future Olympic Games or other similar events should learn.  A way to get a great, naturalistic, fun, smiley picture for the people who want their pictures taken together and to really capture the moment and their spirits.

#groupselfie - it can work for large groups too...don't be afraid to try. 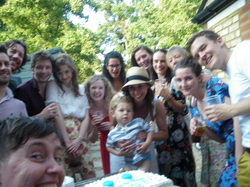 That same weekend I was attending another re-union with @_MovingStories who I worked with on Vanessa and Virginia earlier in the year.

This is currently the largest #groupselfie I have taken.  It has 14 people in it.  I will continue to attempt larger numbers over the coming weeks and want to encourage others to do the same.

And Watch This Space for more.